I am not entirely sure what I expected Edinburgh to be like but the city I found myself in wasn’t it. Due to limited time here on this trip we didn’t venture much outside of the Royal Mile and the Grassmarket but despite the narrowly defined areas and a lack of time I found myself completely in love with the city. The atmosphere, the history, the people, the pubs, the literal stones that made the walls and the streets themselves all completely stole my heart. Kevin and I started the day a bit earlier than Ashley and Kris roaming Canongate Kirkyard just down the street from the entrance to Old Toolbooth Wynd where we were staying. Canongate Kirk and the attached Kirkyard are old, established sometime in the late 1680’s old, beautiful with impressive interments, most notably the young poet Robert Fergusson, and the church is still a place of worship today. We were impressed by the longevity of the building, the congregation, the headstones and were in awe of the setting but Canongate was nothing compared to what we would see next.

The four of us decided to officially start exploring at the bottom of the Royal Mile with a self guided tour at the Palace of Holyroodhouse. Kris opted out to wander around the city for a while on his own while Kevin, Ashley and I explored this incredible structure and the Abby Ruins attached. Holyroodhouse is well worth the 12 pounds it cost to walk through the gates. The Palace grounds and the sections inside that are open to the public are absolutely stunning. Beyond the beauty of the building, and despite previous knowledge of the history, I was still shocked by the sheer age of the walls, and sometimes even the furniture, I was surrounded by once inside. 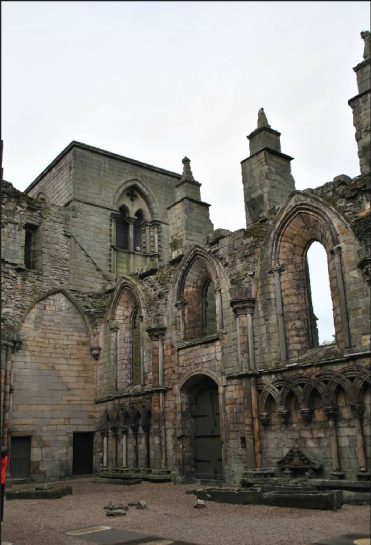 I stood in the same room where Mary, Queen of Scotts once slept, I walked the same ancient stair that the Bonnie Prince Charlie walked, I gazed upon portraits of long dead Scottish Monarchs that had been hacked and slashed by troops following the defeat of the Scottish King’s Army at Falkirk in 1745… There is more known history in this single building than there is in all of Texas, it was heavy and tragic and beautiful; and then to realize that this historic structure houses the apartments to the British Royal Family still today is just mind blowing. And yet all of that was little compared to the Abby ruins adjacent the palace. I really don’t have the words to describe the feeling, the amazement of standing in the center of this Augustinian Abby originally founded in 1128. Even though what I was looking at was the product of multiple renovations, destruction, looting, and rebuilds until the (multiple times restructured) roof collapsed during a storm in 1768, the detail still in the walls and columns, the entombment markers remaining in the missing floor, the height of the peak of the ruined nave swallowed me up entirely. This ruined Abby is soaked in history and beauty and was by far my favorite part of Holyroodhouse.

After leaving the palace we did not linger too much while walking up the Royal Mile as we were in search of Kris and lunch. We found him in a pub a bit more than halfway up high street and then the four of us wandered a bit off the mile in search of food. Along the curved streets neatly lined with equally curved buildings leading to the Grassmarket I had a difficult time believing I was in a real place where real people worked and lived. I was mesmerized by tiny ally ways full of steps leading down into closed residential streets. We were both above and below multiple layers of tenements and pubs. At any turn we could climb up or down into another section of the city all together, nothing felt real, everything looked curious and like an adventure in waiting. We ducked in and out of a few shops and cafe’s until we found ourselves at one end of the Grassmarket ordering food, beer and whiskey at The Whiteheart Inn which boasts to be “probably” the oldest and most haunted pub in Edinburgh. The bartender at Whiteheart informed us that the pub we were standing in and the inn rooms above it is actually a structure built entirely on top of the original Whiteheart pub. Due to famine and war the entire city was built up and businesses were built and rebuilt on top of their closed off predecessors below. The literal depth of Edinburgh is incredible. At a table on the sidewalk out front of Whiteheart the four of us decided to book a haunted tour of the underground for that same evening to hopefully learn a bit more about it all.